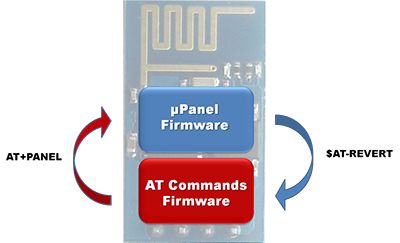 Switch to AT Command Firmware

By default, the module upon reset boots the µPanel firmware, but you can command it to boot with the AT command firmware just sending the serial command  $AT-REVERT (refer to the the page “Serial commands” for details).
After the command is executed, the module will boot always with the AT Firmware.

Please note that, the execution of wrong AT commands may stuck the device into AT mode or even damage the device. If you need TCP/UDP sockets and network communication use the functions provided directly by the µPanel firmware instead (since version 003A). The use of the AT commands is at your own risk!

When the module boots with the AT command firmware, you can command to switch back to µPanel firmware with a specific AT command: AT+PANEL.